We revisit “The World’s Longest Invoice” and examine the growing problem of unpaid invoices for freelancers and SMEs.

Back in 2012, the Freelancer’s Union launched “The World’s Longest Invoice”.

To highlight the vast amounts of money lost by freelancers each year. According to the Union 71% of freelancers struggle to get paid.

They invited freelancers to add their unpaid bills…

Every unpaid bill listed on the site includes a description of the services provided by the freelancer. So we decided to dig into the data and break down the invoice by industry.

Here’s what we got: 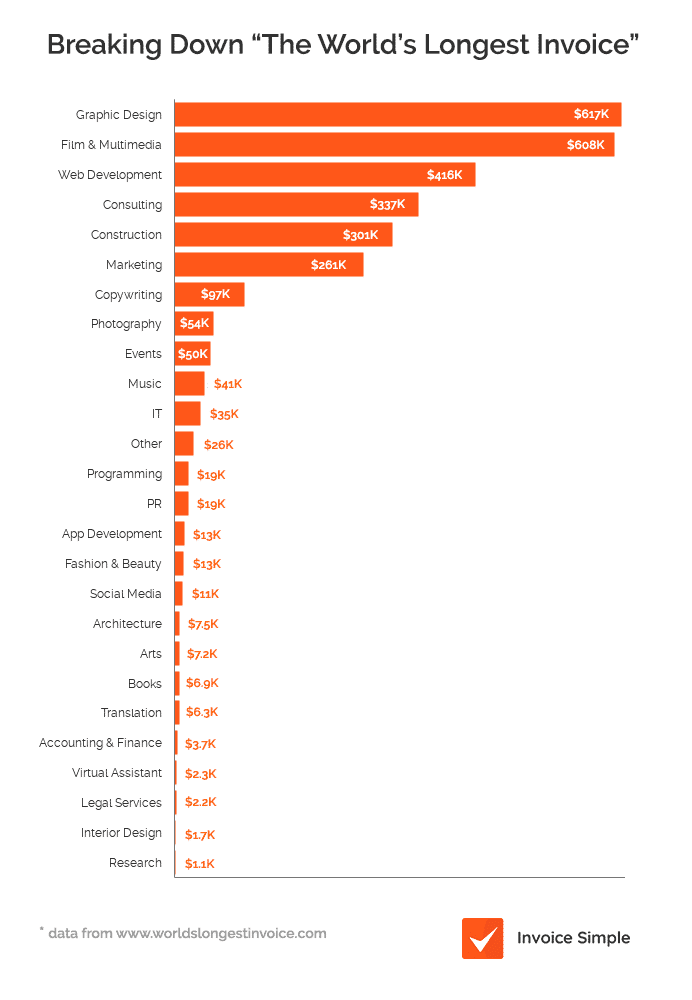 The first thing we should point out is that our total is lower than the figure on the site.

We decided to take out services we didn’t feel should be classed as freelance (i.e. outstanding rents), and we also removed a couple of big outliers.

For example, the $4M+ total includes a single invoice of $1M from a disgruntled screenwriter. We’re not saying that’s not what he might be due, but the figure did seem a little arbitrary.

Which Industries Are Owed The Most?

And they’re closely followed by freelancers in the film and multimedia industry who are owed $607,988, across 48 unpaid bills.

So as we can see, there’s definitely a tech/design skew at the top end of the invoice. Which is probably due to the online nature of the data capture.

Unpaid Invoices: A Big (And Growing) Problem For Freelancers and SMEs.

The total of the World’s Longest Invoice may seem large. But it’s really the tip of the iceberg on what is a huge (and growing) problem for freelancers and SMEs.

And as the number of individuals choosing freelancing over regular employment continues to grow, the outstanding bill is only going to get bigger.

Data from the Bureau of Labour Statistics shows that the number of freelancers working in the United States increased by over 3 million between 2014 and 2017. Bottom line: we don’t expect The World’s Longest Invoice to be paid any time soon.

Are You Struggling To Get Paid For Your Work?

You can check it out here.

Send Your First 3 Invoices For FREE

Get Started for Free Today